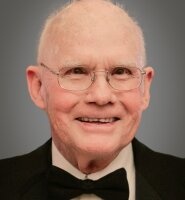 
Donald Conrad Bacon, “Don”, formally a resident of Chevy Chase, Maryland living in Pompano Beach, Florida, passed quietly away in his sleep on Sunday, July 11, 2021. He was 86 years old, born in 1935. He is survived by his college sweetheart and beloved wife of 64 years, Barbara Barnwell Bacon; his daughter, Elizabeth Bacon (Joe) Carbine; his grandson, Kevin Barnwell (Carly) Carbine; and his three great-grandchildren, James, Emilia, and Cohen. Don was predeceased by his seven-year-old daughter, Jennifer Frances Bacon, and his grandson, Scott Bacon Carbine.

Don earned his Journalism degree from the University of Florida in 1957 where he was “editor in chief” of the Florida Alligator. He was a notable writer and editor throughout his life having begun his professional career as a uniquely selected young graduate by the Wall Street Journal, where he was a staff writer until 1961. Though humble and private about his accomplishments, Don’s outstanding political and government writings include cover stories and reports for the Washington Star as a Washington, D.C., staff writer, 1962-63. He was also a journalist for Newhouse News Service in Washington, D.C., as a congressional correspondent and then became a White House senior correspondent and columnist, 1962-75. He joined U.S. News and World Report, in Washington, D.C., as an associate editor, 1975-79, then senior editor, 1979-81, and later assistant managing editor, 1981-88. He was senior editor of Nation's Business, 1988-89 and became project director and co-editor of the Encyclopedia of the U.S. Congress, Washington, D.C., 1989. Donald’s publications include The New Millionaires, 1961; Congress and You, 1969; Rayburn: A Biography (with D.B. Hardeman), 1987; and most recently, a biographical volume, Nicholas Longworth: The Aristocrat Speaker (with Dr. Anthony M. Champagne), 2021.

Don received numerous awards and recognitions in his career including the Loeb Award, University Connecticut, 1961; Award for Excellence in Journalism, Lincoln University, Jefferson City, Missouri, 1977, Distinguished Alumnus Award, University Florida College Journalism, 2001. He was also president for the Fund of the Study of Congress, 1989. He was an elected member of Washington, D.C.’s distinguished Cosmos Club and Columbia Country Club of Chevy Chase, Maryland.

Don was a kind, gentle, absolutely brilliant man and scholar. He had an extraordinary knowledge of Congressional history with the gift of bringing that history to vibrancy and life. In addition to his exceptional career in political journalism, which he loved, Don was interested in just about everything. Don traveled extensively with his wife, Barbara, planning wondrous visits in tucked-away places around the world. An astute listener, he would often not needlessly comment, yet being a skilled raconteur, Don could quickly capture a conversation with his trove of information and rich experience. Don was a quiet gentleman with an intellectual distinction and incisive wit that made being in his company both enthralling and fun.

Don relished finding treasures. His favorite hobby was to poke around flea markets, yard sales, and thrift shops in search of the rare book or novelty, art piece or gem that seemed to be hidden from all eyes but his. He’d even choose broken, tossed away items such as old clocks or cameras then restore them himself to keep or sell later.

The passing of Don Bacon is a loss that runs deep on countless levels both privately and publicly. Together with the love of his family, Don’s friendships were both long-lasting and personal as is the compelling legacy of the innumerable articles and volumes he masterfully published.

No memorial service is currently planned. The family will notify in the future when a service is scheduled.
Any gift in memory of Donald C. (Don) Bacon may be made in the form of a donation to: The
Jenny Fund Against Cancer in Children at St. Jude Children’s Research Hospital. Online: https://fundraising.stjude.org/site/TR/GiftFunds/GiftFunds?px=7122783&pg=personal&fr_id=39300 . Or mail check to St. Jude Children’s Research Hospital , 501 St. Jude Place, Memphis, TN 38105 and include in memo: for “The Jenny Fund Against Cancer in Children”.
To order memorial trees or send flowers to the family in memory of Donald Bacon, please visit our flower store.