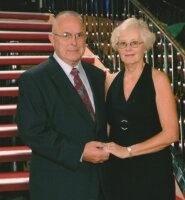 George was the son of Marjorie Eakle and George Hill. He owned and operated a sheet metal business in Kankakee, Illinois for many years. Rain or shine, snow or sleet, George showed up to work and performed his craft with exceptional diligence and precision.

After almost a decade of courtship, George and Sharon married, and for both of them, life had begun. The deep love they shared, nestled in the beautiful little home they bought together in Kankakee was evident to everyone around them. Their sense of humor, their sense of adventure, their love of animals and all things country and western, their sense of duty to man and country would serve to bond their union of over forty years.

George’s talent in the sheet metal industry expanded to his love of flying, and he built and flew his own single engine airplane. His hobbies were endless, from car racing, to boating, to hunting, fishing, and traveling. Some of his best times were spent taking his beloved wife and multiple fur babies on adventures across this beautiful United States in their 36 foot fifth wheel.

George was from an era of old, with standards and principles of times gone by. He was not only hard working, but honest and fair. Right was right and wrong was wrong. He believed in a hard days’ work for a day's fair wage. He honored his wife above all else, and she honored and served him above all else in return. He loved his country, serving in the United States Marines and was an upstanding citizen of every city through which he traveled.

A man of quiet strength, George will be remembered forever by his stepdaughter, Rhonda Krill and his many friends from every community in which he lived.

Rest in peace, George. You are loved.
To order memorial trees or send flowers to the family in memory of George Hill, please visit our flower store.