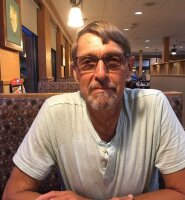 Harold Charles Hoisington was born on July 9, 1951, in Hanover, New Hampshire to the late Dennis and Beverly (Bond) Hoisington. He grew up in Plainfield, NH, and graduated from Lebanon High School in 1969. He was a member of the United States Coast Guard, active duty, from 1969-1973. He then spent several years working in the shipyards, until a workplace accident causing significant burns all over his body disabled him in 1980. He later took on odd jobs as an electrician/handy man. He loved to work with his hands.

Harold was a collector of many things, and particularly loved to find and collect wheat pennies and other coins, and eagle figurines and statues. He spent his free time doing jigsaw puzzles that he would then hang on his walls, crossword puzzles, and attending AA meetings. Harold was very proud of his sobriety, having over 25 years being clean and sober, with the help and guidance from his sponsor, Harry. It was through that journey that he found his true calling to help others through their AA steps as a sponsor. Harold had numerous sponsees that have said that he saved their lives.

Harold was a private and proud man, and nothing made him more proud than his daughter, five grandchildren, and one great granddaughter.

He is survived by his daughter Tracy Ann Abbo, of Wixom, Michigan, his grandchildren Joshua, Hailey, Trevor, Braydi, and Bobbi Sophia, and his great granddaughter Leighton.
Harold’s surviving siblings are Terry (Ernie) Maxwell, Michael (Carolyn) Hoisington, David (Bernadette) Hoisington, Gary Hoisington, and Alicia Fillion. He was predeceased not only by his parents, but also his sister Holly.

He leaves behind special friends that were so helpful to his family during his last days and the days that have followed. Silvia Trapper, Quinn McCullough, and Stephanie – you are a blessing to us, thank you so much. To all the other friends that have shared wonderful stories and kind words – and it’s a long list – we thank you.

Due to the unfortunate circumstances in the world today with Covid19, we are not able to have a service. A celebration of Harold’s life will be planned at a later date.

In lieu of flowers, donations can be made to the family via paypal (tracy.abbo@yahoo.com), cashapp ($TracyAbbo776), or venmo (@Tracy-Abbo).

In addition to handling final wishes and expenses, the family would like to do something special with Alcoholics Anonymous.
To order memorial trees or send flowers to the family in memory of Harold Hoisington, please visit our flower store.