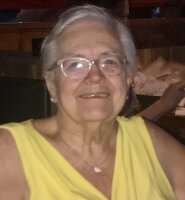 Marilyn Patricia (Young) Raudat, age 79, passed away peacefully at her home in Fort
Lauderdale, Florida after a brief illness on June 30, 2020, with her family by her side. She was
born October 23, 1940 in New York, New York to the late John Martin Young and Mildred
(Salivar) Young. Her father died while serving in the U.S. Navy in World War II, and her
mother later married Charles F. Gilbert.

For most of their married lives, they resided in Seminole, Florida, until 1982, when they
relocated to Shoreline Connecticut, Joe’s childhood home, residing both in Madison and
Branford, Connecticut, until returning to Florida in 1999.

Marilyn capitalized on her nursing career and became a successful businesswoman and visionary
in the healthcare industry, owning and managing several home healthcare agencies in
Connecticut, Tennessee, and the U.S. Virgin Islands.

Marilyn and Joe loved to travel and visited many places as they explored new cultures. They
especially loved the Greek Isles, where their ashes will be scattered.
Throughout her life, Marilyn had a deep love of her family and friends and took tremendous
pride in her children and grandchildren, and their many accomplishments. She felt they were her
greatest accomplishment and legacy.

A memorial will be planned in the future. In lieu of flowers, donations may be made in her
memory to Catholic Charities USA. https://www.catholiccharitiesusa.org/ways-to-give/
To order memorial trees or send flowers to the family in memory of Marilyn Raudat, please visit our flower store.